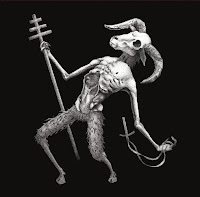 I don’t know what they’re putting in the drinking water in Australia, but the land down under has spawned two exceptional traditional doom bands—Dire Fate and Rote Mare—who practice what can only be deemed as melodic doom metal. These two likeminded bands heavily mine the Sabbathian blueprint for their particular approaches, especially the haunting eponymous opening track from Sabbath’s debut, but each band proceeds to imbue their tunes with an ariose sensibility through their lush guitar leads, strong vocals, and subtle tempo changes that keep the tracks from becoming mired in plodding repetition. Dire Fate may not have the recorded output to match Rote Mare’s string of demos, debut EP, and a full-length album, but the band does manage to contribute three tracks that are within the same realm in regards to consistency and melodicism.

Dire Fate opens the split release with “Evil Ascending”, a moody, three minute instrumental that is reminiscent of Indiana’s mighty Apostle of Solitude. “Evil Ascending” slowly builds the tension that ends in a wash of feedback before “Satanic Eclipse” triumphantly rears its two-horned head. Like the best in traditional doom, the main riff is sinister and larger than life. Dire Fate kills it with this track. The vocals of Philip D. Atropos have a commanding, yet slightly theatric characteristic without sounding too over-the-top and they help carry the tune. The third track, “Salvation Through Pessimism”, continues and hones the band’s melodic sensibilities with the track’s opening guitar leads that slightly echoes Electric Wizard’s “Witchcult Today”. The remainder of the track is a slightly NWOBHM tinged traditional doom song that meanders through a variety of tempo changes. Again, Atropos’ s vocals soar on this track and add depth to an already great tune.

“Sinking Ships”, the first track from Rote Mare, is a bit uncharacteristic for the band in that it has an overall “gothic” sound to it and falling short of the three minute mark it is by far the shortest track penned by the band. Rote Mare has already established themselves as masters of melodic doom on their excellent debut EP, ‘Sorrows Path’, and the just as good follow-up full-length, ‘Serpents of the Church’, so this subtle departure in“Sinking Ships” is an anomalous detour that shows the band in a new light. The vocals of Phil Howlett are forlorn, yet more subdued on this track compared to other offerings which contributes to the gothic overtones. Whether the track works or not is almost inconsequential as the song ends almost as soon as it begins. The album ends with “Hour of Doom”—arguably the centerpiece of the split. This is Rote Mare at their finest and probably Howlett’s most expressive and powerful vocal performance to date. At nearly fifteen minutes in length “The Hour of Doom” makes it worth seeking out the split for this track alone, but the quality of the other four tunes makes this release that much better. The final track is a beast of a tune that showcases Rote Mare’s uncanny ability to craft songs that are epic in scope without testing the endurance or patience of the listener. The song effortlessly shifts from crushing, mid-paced doom groove to a contemplative crawl without missing a beat. Fine stuff indeed.

I initially sought out this split for the Rote Mare tracks, but was pleasantly surprised by Dire Fate’s contributions. Hopefully the Dire Fate/Rote Mare split is indicative of great things to come from both bands, especially the lesser known Dire Fate. While the direction of both bands have yielded a similar style of traditional doom, the two entities remain separated by impressive vocal performances. Fans of Black Sabbath, Reverend Bizarre, Gates of Slumber or even Orodruin should be able to find redeemable qualities in both of these Australian bands. Rote Mare has made a handful of releases available via their Bandcamp page including a couple of demos. Hopefully Dire Fate will follow suit.
Words : Steve Miller
don't know why the fuck  I can't post properly a video of each band, but anyway here are links to : Dire Fate 'Satanic Eclipse' and Rote Mare 'the Hour of Doom'.
https://www.facebook.com/pages/Dire-Fate/166545880027108
https://www.facebook.com/rotemaredoom
http://www.rotemaredoom.com/fr_intro.cfm
http://rotemare.bandcamp.com/
Posted by Unknown