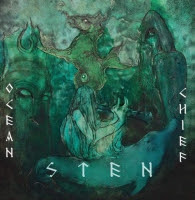 "Sten" is the 4th album from Sweden's OCEAN CHIEF (not to forget two split albums too !), their 1st in collaboration with I Hate rds, and has been released about a month ago... It's fresh, it's hot, it's a grandiose achievement that will undoubtedly stand the test of time ! This new album also marks the coming of Johan Pettersson as keyboardist (on a MiniKorg 700) to complete the original trio, but in no case his presence softens the sound of the band - see it rather like a complement to enhance dark and crushing atmospheres (the song "Stehög" perfectly illustrates this).

If you're new to the name of  O.C., you got to know that those obscure purveyors of hulkian riffs are playing in the 1st category of sludgy Doom, you know that crushing and epic kind of stuff à la Yob, Kongh and eventually Sleep, Ufomammut (if necessary I could precise : all in their earlier days...).
Bands that share the particularity to have affection for long songs, no exception here as we've got 4 songs that last from 15 to 20 minutes. But -as said- O.C. are not young newcomers, they are now consequently experimented and throughout the years and now numerous releases have managed to craft their own sound, not much more complex, still immensely heavy and crushing, but thicker in pulsing fuzziness ("Den sanna styrkan"), slightly more refined and epic ("Stehög").

I could have even added melodic with the closer "Oden" but the mood is being so relentless and hopeless that the usual sense of melody could almost appear uncalled here. I exagerate a bit of course, there's soaring melodies in this 4th effort but don't expect them to border in progressive fields or psychededelic dementia !
Never completely suffocating like a Conan, finding a good balance - midway between desolate and cosmic fields, OCEAN CHIEF optimize here the maximum heaviness and transpose it in the most obscure territories of what you can expect from a heavy sonic band (the song "Slipsten" is a truly unique journey, there's a triumphant tone which adds a nice dramatic to the song).

A thing that is also particularly enjoyable and distinctive with Ocean Chief concerns the vocals in swedish, for us -southern europeans, those scandinavian languages seem rather obscure, pretty harsh, almost hostile... certainly is this unconsciously attached to the viking image too, but this is something which at least fits perfectly well with Tobias vocal caracters and lyrical themes; with a bit of imagination I easily imagine him as a Mike Scheidt in mode stoned-viking and that fuckin' rules, nothing forced and imitative towards Eugene's god, just amazingly raw and commanding !

And now if it was finally time for Ocean Chief to get the deserved recognition they fucking deserve for a while ? let's hope that this new deal will help cause this "Sten" is already one of the major releases of 2013, an album absolutely not to miss...