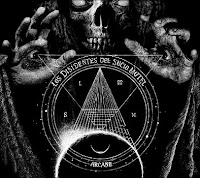 Recorded at Cube Studio (Besançon, France), this brand new full-length effort (the second one after "Soundtrack from the motion picture", 2010) will be released on CD/LP and digital with an awesome cover-art done by ElvisDead (The Melvins, Graveyard, Sick of It all...).

From now, a new song by LDDSM, "Ouija", has just surfaced on the web and it kicks your ass right NOW.