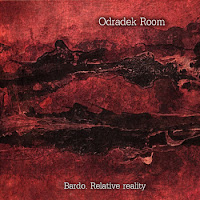 "Named after one of Franz Kafka's short stories, ODRADEK ROOM is an atmospheric and progressive death-doom band with post-rock leanings from Mariupol, Ukraine.
Initially formed in 2008 under the name 'Shards of Silence', the past five years have given the band ample time to develop and refine their sound for their debut album 'Bardo. Relative Reality'
Creating dynamic and profound music, rich in tempo and mood variation, Odradek Room has crafted an extremely strong debut which perfectly shows the duality between the aggressive and melancholic sides of death-doom combining slow plodding riffs, soaring emotional melodies, post-rock leanings, and a psychedelic touch to create a rich canvas of sonic majesty.
A conceptual album based on the ideas of the Tibetan Book of the Dead and surreal images of the subliminal consciousness, the album consists of seven songs and an hour playtime, released in a digipack with a 12 page booklet including the full album's lyrics in both Russian and English, since it was very important to the band for the lyrical concept of this work to be comprehensible in both languages. Unique, mature, and with a well-defined personality, 'Bardo. Relative Reality' is a highly recommended debut album from this young Ukrainian band."
http://www.hypnoticdirgerecords.com/odradekroom-bardorelativereality-tobuy.php