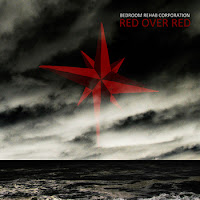 B.R.C. are a surprising duo coming from New London (CT, USA) - comprised of Adam and Meghan, who recently released their debut album "Red Over Red" through a local label called The Telegraph Recording Company...

Not just because their duo doesn't consist in the "usual" Guitar/Drums formula, but also because they blend quite many styles and moods, plus have written here "a paranormal seafaring concept record", we've got here an amazing album that is as unpredictable as it is consistently heavy... And indeed, BRC is to be ranged in the category of Bass and Drums duo-bands, citing themselves Big Business as influence, while at times OM would not be shocking on their list too !

DOOM/HC-PUNK/STONER/PSYCHE, you got plenty of that in "Red Over Red" and even more with hints of Blues and fuzzy sludge too ! but what is fresh and different, from what I usually listen, is that there's no METAL overtones here  (the absence of guitar...), all in all let's say that this is some fucking HEAVY and crushing Rock'n Roll !!!

One thing which bluffs me with this type of bands is the incredible space that a guy can fill-up with just his bass and Adam is not an exception, he brings to the table so many big riffs and  different sounds with a large range of pedal effects delivering distortion, feedback and noise... Meghan is never in rest on drums and hold the beat substantially; partners in everyday's life, their natural complicity is often underlying and is undoubtedly a real asset for the band. All is perfectly valued by a faultless production - by Justin Pizzoferrato who worked with Dinosaur Jr, Sonic Youth and Black Pyramid...

A bit like the sea which serves as basical concept of the album, the music of BRC can be quickly shifting from dark and tormented, to quiet and beautiful. Indeed BRC apply successfully - from song to song, variations on dynamics and tones which can give you a harsh and thunderous composition ("Captain Damnit", "Caught in the Bite"), followed by a doomy and plodding one (see couple of songs mentioned below) and finally a spacey and atmospheric track ("Son of Siren", "Pilot Fish")... oh shit I forgot the poppy-noise hit "Splice the Main Brace" !!!

I can not forget to precise that one of the most noticeable influences that I hear on this brillant album is SAINT VITUS,  both musically and vocally wise (maybe not as rasping as Wino though)... it may be difficult to imagine how could sound SV without the guitar of Dave Chandler but in the doomiest and most crushing moments ("S.S. Hangover", "Gone by the Boards") there's really that visceral, plodding tone which remind the Doom legends... we can even detect it in songs like "Basilosaurus" or "No Payment for the Boatman" but this time blended with a 90's obscure melancholic touch and all in a southern mood (!)  like if Wino and his buddies had partied hard with Alice in Chains and Jesus and The Mary Chain somewhere near la Nouvelle Orleans, improbable but cohesive !!!

Well, ok I like to put names as references/influences but believe me there could be more here - like FU MANCHU, MELVINS, etc... bands that are honest and thoughtful, no bullshit, just heavy stuff with an artistic vision that is free, authentic and unbridled... this perfectly corresponds to what the duo has achieved with this album.
Sure,Bedroom Rehab Corporation are at the dawn of their history compared to such legends, as diverse as they could be, but  yes the duo definitely already go its own way and is damn potent at it; especially for a 1st album, such diversity and audacity deserve much respect and attention !