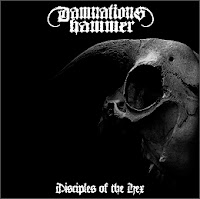 How progressive is it to pay hommage to "avant-garde metal", as the label circumscribes the aim of this new band, of a time bygone for at least two decades? Well, if you can stomach the fact that Damnations Hammer don't add much to the formula established by Tom Gabriel Warrior and the likes in their heydeys, you can take a lot of pleasure in their debut album.
This is not least to the fact that the group has the necessary songs to live up to any claims they make, however silly they may sound. "Disciples Of The Hex" is all-out sinister doom metal and nothing else: Leaden riffs, a prevalent dark atmosphere and a singer who enunciates clearly, but refrains from any operatic manners. What you get after an unassuming introduction (which is frankly as unnecessary as the droning interlude "The Hex II") is a bunch of well thought-out simplicity, the devil of which lies in the details, for example the evocative solo during the opening "Throne Of Fire" or the multiple tempo variations the group applies. Axeman and singer Tim reminds us of Deceased's King Fowley at times, by the way.
The crushing uptempo title track with its moody, narrative middle section is actually the weakest link in the chain, but other than that, these Lancashire-lads (the distanced character of the music doesn't hide a certain British aloofness, which is a good thing in this case, as well as some hardcore roots manifest during "Impaled On The Horns Of Betrayal) make for a diverse and entertaining listening. "Serpent's Wrath" with is catchy chorus is the clear highlight of an album that doesn't add much to an imagery and style long since cultivated, but if you need more than your daily fill of Celtic Frost with a tinge of more classical doom, there are far worse bands out there you could choose.