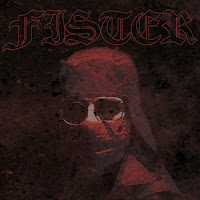 St. Louis, Missouri’s masters of malevolent doom, Fister, have on all accounts topped their previous EPs and excellent debut full-length, ‘Bronsonic,’ with a nod to the King of Venereal Horror on their latest-and-greatest, ‘Gemini’. I was turned on to this acerbic, three-headed doom beast by Grant from In the Company of Serpents and have been floored ever since. With ‘Gemini’ the band has managed to incrementally increase and focus their loathing into a full-on aural assault without completely sacrificing the atmospherics that made the ‘Violence’ EP so memorable. While this newest collection of tunes is filthier, angrier, and seemingly steeped in hopelessness it is not completely devoid of moments of melody or tenuous beauty. The band has included some extra players in the studio and widened their scope and instrumentation with the additions of piano, violin, tuba, trombone, upright bass and added guitar work. This is easily Fister’s deepest release to date.

“Antitheist”, initially, brings Fister’s sound to abominable, unfathomed depths and really sets the tone for the remainder of the album. The opener kicks off with a staggered, triumphant riff that is embellished by torturous feedback before settling into a monstrous crawl. There’s almost no escaping the baleful grasp of “Antitheist” until the band lets the listener up for air near the three minute mark with a doom-as-fuck Thin Lizzy guitar attack. The closing moments of the track ultimately spiral into a maelstrom of tormented bellows that is contrasted with transcendent strings for a brief moment of sublime beauty and despair. The band’s balance of scorn and ambience that was so apparent on the ‘Violence’ EP has been perfected and is selectively threaded throughout the seven tracks of ‘Gemini’. “Suicide Hessian” amps things up and finds the band shredding with an intensity and fury that is uncharacteristically at odds with their “If it’s too slow, you’re too young”doctrine. But it’s not all hateful, up-tempo blackened doom with “Suicide Hessian” as the song still manages to put on the brakes. It’s the subtle inclusion of clean vocals at the end of the track that really elevate “Suicide Hessian” above and beyond.

Like no other, the title track, “Gemini”, appropriately encapsulates the dichotomy between venomous sludge and moments of delicate instrumentation. It is a symbiotic and fragile bond that, for the most part, leans heavily toward the venomous sludge end of the spectrum as far as Fister is concerned. But “Gemini” finds the band teetering on a precipice between these two chasms. Piano and bowed bass are intermittently savaged by outbursts of malignant rage and it effectively cleaves the album in two. Another album highlight and the longest track, “Permanent Chemical Psychosis”, finds the band at their doomiest while still taking the time to rock the fuck out. The band ultimately finds a steady, repetitive rhythm and the lead guitar sprawls out over the groove. The weight of album closer “Invisible Corpse” is initially carried by the distorted bass and steady drumming of the rhythm section, but finally devolves into a stop-and-go cadence of utter despair. The thread of ambience or any semblance of anything other than disdain has clearly run its course.
Fister has has only gotten better with each subsequent release by honing their particular brand of blackened doom and sludge. Despite the inclusion of additional instrumentation ‘Gemini’ is mean as Hell and may be the band’s ugliest album yet. ‘Gemini’ is certainly on par with their last EP,‘The Infernal Paramount’, and in many regards eclipses that achievement. Each track writhes with a life of its own and the tunes are more expansive than on previous releases. Not only can Fister churn out some of the most caustic tunes out there, but they also know how to craft a song and include some subtle, yet discordant hooks.