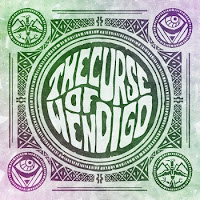 If you aren’t bored with home made variant of American psychedelic doom stuff yet, you should pay your attention to The Curse of Wendigo, That  formation from Donetsk region, Ukraine has a couple of aces in the hole even for sophisticated fans of the aforementioned and neighbouring genres. But, honestly, considering the fact the guys are of Ukrainian origin, I have a great mind to compare The Curse of Wendigo to their closest colleagues from Kiev – Ethereal Riffian. Moreover, both bands have similar ‘Indian’ concept and, say, record quality. Well, let’s dig a bit deeper.By the moment of release of its debut album titled "Eclectic Tail" (December 2012) the band had been active with complete lineup for a year only, and if you read the interview with band members available on doommantia.com, you’ll find out that the whole stuff was recorded within a one day, and that some pieces were literally completed in studio. Is it easy to perceive actually? Sometimes indeed, and the record is to scarcely impress you with volume and deep sound. However, today is the case when such serious omission could be left unnoticed. There are no more and no less than five reasons for that because it’s a number of tracks excluding short intro titled "Here Comes Clint Eastwood".

Though "Eclectic Tail", this 8-minute title track starts somehow fuzzy (barking vocals and aggressive, almost sludgy riffing), its main, conditionally "meditatively psychedelic" line getting more “doomy” and heavier and coming back to acoustic passages and chanting vocals appears really attractive, and using harmonica – isn’t it a good idea? In a whole, it is a serious and complex piece with strong culmination and epilogue once again hooking up with introduction. Well, good start. Next comes… space western for doom cowboys, namely "Gloomy Friend". Sleepy introduction with focus on old-school acid rock and heavy blues for tough guys as frame of the whole piece provides bloody positive effect, the one making us listen to the record on. But "Endless Hunger" – apart from previous pieces – is simpler and angrier, it is this track to reveal the image of ogre spirit from Indian legends, and the soundscape of the story is groovy southern rock. Unfortunately, raw sound and clumsy guitar parts spoil the piece making it sound unbalanced and somehow incomplete. Aggressive vocals, to my mind, do not fit The Curse of Wendigo, though I can appear prejudicial in this relation.

According to the guys themselves, the following track – "The Prodigal Son" – turned to be the most “laboured”, I wouldn’t agree here! Let the guys tell they haven’t heard God’s Tower, but I’m not the only one to find similar elements in guitar sound of Ukrainians and Byelorussian pagan doom old-timers. Even subject to absence of ‘pagan’ factor, the song is fully pleasant with its riffing and soloing. "Fallen Treasure", I think, is the most traditional and thought-through piece of the release – actually, it actually sums "Eclectic Tail" up, combining doom and psychedelic features and being common denominator to both. The track sounds persistently and has many hooky instrumental tunes, though vocals are not always perfect – this remains the point to work upon. Nevertheless, this is a good end of the album, it makes it whole as it should be.

The Curse of Wendigo is not unique, yet rather original appearance on post-Soviet doom scene, when, as it may seem, everything is already said and done, there is always a chance to find something interesting among new formations. Band’s debut release is noteworthy for fair audience, but I’m pretty curious to know what’s coming on their next album, as, apart from working on in direction chosen on "Eclectic Tail", The Curse of Wendigo can choose to follow down the beaten path towards trendy and total stoner scene. Though the album appeared hard to listen to for the first time, in course of checking it out over and over when getting ready with this review, I kept on revealing more of new features in it and remain satisfied with the result. Well, guys, get properly ready next time! As for now, the start is good – just keep on rocking!