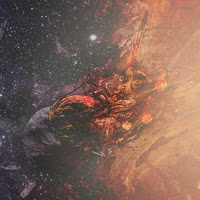 After having shared live performances last year and becoming good friends, HUATA and BITCHO decided to form an alliance to release this split LP under the sign of hypnotic and droning psychedelism.

One year after their first full lenght ("Atavist of Mann", 2012), HUATA -from Brittany- comes back with two new tracks, a new psychedelic sludge dimension for this occult doom-stoner band that reminds SLEEP or ANCESTORS with very particular arrangements.

BITCHO from the Netherlands presents a long track (12 mn) with down tempo tunes a la GODFLESH and creeping sludge riffs with incantations.

HUATA have also new T-shirts for sale and will be again on tour in May with the mighty canadians of DOPETHRONE, watch out for dates below and updates on their fb page :