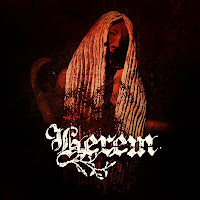 This one is the last and 3rd CD that I've received recently from INVERSE rds : the sophomore album from HEREM, simply titled "II"... and again, here's a band that is pretty different from what we hear these days, from Female fronted bands in particular ! This quintet is indeed fronted by a girl named Valendis Suomalainen and beyond a solid musical performance, her presence is really remarkable in my opinion.
HEREM's style is something not easy to describe, their atmospheric form of DOOM basically takes roots in the early-mid 90's, reminding a blackened version of the solarized CELESTIAL SEASON with that same melodic, ethereal and melancholic approach. Maybe the purest fans of Doom would judge it's more fair to qalify this exactly as Doom/Death, not necessarily in my opinion...
Not as melancholic here though, even if the overall remains melodic and refined, through some creepy riffing and evil vocals that are not far the most possessed moments of WOODEN STAKE's Vanessa Nocera, HEREM is darker, more menacing and grasping; some more recent references like YOB ("Babylon") and THE ATLAS MOTH (for the twined guitars work) can be then considered, thickening their sound and heaviness.
Not particularly intricate, the tempo never gets high but is always enough heavy and catchy to avoid some too mellowed feelings, there's some very slow atmospheric moments but they reveal, in an amazing way, some of the gloomiest  parts of "II" and prove that Valendis has an high potencial range of vocals,  just like on "earth" or "Babylon".
More confidential and maybe not as opened as the Swedish one, the Finnish scene is yet actually one the most interesting in Europe and INVERSE records proves it here again, so check this great piece of atmospheric doom now !