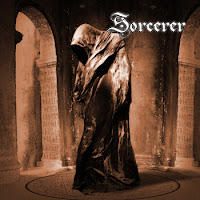 A bit of history first, about those Swedish legends :

SORCERER formed in Stockholm, Sweden in 1988 and released their both demos on CD through BRAIN TICKET rds in 1995.
In 2011 John Perez re-released their demos again, now re-mastered.
In 2010 the band reunited for the Hammer of Doom Festival in Germany and in 2011 played another successful gig at the Up the Hammers festival in Athens, Greece.

After that gig the band decided to write some new songs and is recording a new full length album for a 2012 release.

For those who don't know yet this top notch Epic Doom Metal band, the song "the sorcerer" from the re-edited cult first album is now available for free download on Bandcamp  !!! Just this song should convince you to check out this CD which contains no more than 15 songs and is available for 14 Dollars.

Finally, the band has been announced as one of the headliners for the MALTA DOOM FESTIVAL 2012 (November 02 -03).... obviously playing some great new anthems of epic DOOM !!! You'll read some more detailed informations about this cool festival within a few days through Albert Bell...