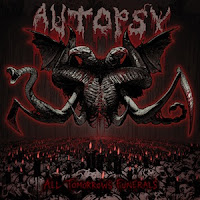 ‘All Tomorrow’s Funerals’, is the latest chapter in the history of the death metal legends. This monstrous release contains new studio tracks recorded late 2011 - including a re-recorded version of classic oldie 'Mauled to Death' - plus all of Autopsy's past EP's & rarities which have been specially remastered by the band themselves, totalling 22 tracks all together, resulting in over 73 minutes of sickness. Everything from 'Retribution For The Dead' & 'Fiend for Blood', to the now sold-out 'The Tomb Within' is present, including liner notes from the band and new cover art from renowned artist Matt Cavotta (also responsible for the 'The Tomb Within' cover). This edition of 'All Tomorrow's Funerals' is presented on double gatefold vinyl.
Preorder now for 20th February 2012 release date here at PEACEVILLE

Tracks
SIDE A
1. All tomorrow's funerals
2. Broken people
3. Mauled to death
4. Maggot holes

SIDE B
5. The tomb within
6. My corpse shall rise
7. Seven skulls
8. Human genocide
9. Mutant village