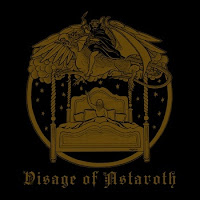 Set Upon By The Visage Of Astaroth
by Wes Cueto (Portland, OR, USA)

PILGRIM / ICE DRAGON - "Visage Of Astaroth" split 10"
Yersinia Pestis, 2011
This is a split by two relatively unknown but extremely potent bands right now, which may have flown under your radar since it came out very late last year. I first became aware of Pilgrim last spring from the release of their "Forsaken Man" cassette demo and Ice Dragon shortly after when they released their sophomore effort "The Sorrowful Sun" which just happened to be my favorite album of last year. Needless to say when I heard news of this split sometime in August I had been sitting anxiously in anticipation for it. Now that I've already listened to it more than enough times in various states and at various speeds and frequencies I've got to fill you in on why, if you enjoy doomy stoner type metal and have not already checked out these two bands you need to get on that pronto.

This is a 10" record that runs at 45rpm and Pilgrim gets things started on the A side with their track entitled, "Astaroth" (6:33) that opens with samples of dialog from one of my very favorite Hammer flicks, "To The Devil A Daughter". Now Richard Widmark and Nastassja Kinski go a long way in my book but after that the riffs begin and over the top, just before they start to kick in real heavy is the voice of Christopher Lee. Nuff said. Drums start to happen and Astaroth's ship takes off into the night with some killer soaring riffs. The rhythm of the guitars and harmony of the backing vocal cadence in this song is so nice and the lead vocals don't even begin until about half way in so you get a lot of time to sit with the track and let it build atmosphere which I thought was an excellent choice. One thing I really enjoy about both these bands are their vocals. Pilgrim's vocals soar over the track with grace and like the perfect amount of emotiveness. The track kinda plays off the same riff for six and a half minutes but the riff is solid and driving so it doesn't get old.
Now on the B side is where Ice Dragon get a chance to strut their stuff and believe me, they've got the goods. This split is dedicated to Astaroth, who incase I forgot to mention, is known in the field of demonology as a Crowned Prince of Hell. That being said, Ice Dragon's contribution to this split is also entitled "Astaroth" (6:49) and this track also begins as it does end with some dialog samples that I was unfortunately unable to recognize. Anyway, Ice Dragon have this way of writing metal songs that sound like Gregorian chants as performed by members of Blue Cheer and Boulder Damn, it's weird, inexplicable but I love every second of it. Their tribute to Astaroth is much slower and weightier than Pilgrim's soaring send up. Very bottom heavy and bass driven this track drags in the best way possible and leaves you wanting for so much more. If thirteen minutes of astral projecting doom isn't enough, this record comes packaged in some really beautifully eerie and dreamlike artwork by Josh McAlear at Yersinia Pestis