"the descent" by DEMONIC DEATH JUDGE 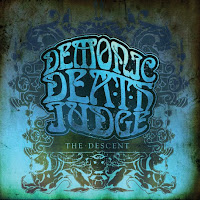 Shit, could I change my Poll for 2011 ?!!!
Well, this is not really important, things are done and better (a bit) late than never of course... I'm sure almost everyone feels about the same in the first weeks of each year and also that I won't be alone to have missed this absolute MASTERPIECE in 2011, as it has been released by the end of November. This is just like for example another Finnish jewel named '"signs of Osiris", many people (especially in the USA) are just putting their hands on it in 2012 !
If you don't know anything about DEMONIC DEATH JUDGE, before reading what follows, please listen now to their sound below ! I woudln't like you to think that I'm on a special trip ( who said "again" ?), exagerating on the originality and quality of this band.
Because, this is so quickly obvious, we've got here an authentic hope in the SLUDGE scene, which is definitely a genre that is more and more evolving !
Indeed, the band's style is basically SLUDGE, fuzzing and blackened, dark and grimy, à la  DOPETRHONE (vocally wise especially ) but, without considering at all that just this reference could limit their identity,  the sound of this Finnish quartet is opened to quite many other fields of underground heavy musics, which make it  thick and very distinguishable.
First, their Metal origins : certainly not  only for having played in a DM band before but also because there -in Finland- the legacy of DM is just HUGE, riffing sounds a bit like the chainsaw type of  guitars from ENTOMBED, of course not on the same tempo but the grain is here (just listen "none of it") ,while  again a scandinavian Black edge is sometimes envelopping the rythmic  section and  filthy vocals.
Second : the psychedelic edge, which could seduce a great part of STONERheads while Sludge is usually maybe not their cup of tea;  it could surprise a bit at first sight, but is very tightly and homogeneously displayed, most often through luminous solos that refresh and refine the overall atmosphere. It brings a more mellow side, filled with tasty smoke in the air (the instrumental "stick that in your pipe and smoke it" could remind the most memorable moments of YAWNING MAN) !!!
There's nothing to throw but my fave songs are "Churchbuner", "the descent", "none of it" and "four",(such an awesome 2nd part on this one with maybe the blackest moments accompanied by what sounds like an harmonica !), highlights of buzzing and massive heaviness that make this album more than essential.
Thanx to INVERSE records for realeasing this especially and more generally to support and release great locals bands from a scene that remains a fantastic purveyor of talents.
How could I know how the extreme Metal scenes will evolute in the next decades ? but I'd  enjoy the perspective to know that my grandchildren will listen somekind of D.D.J. METAL !!!