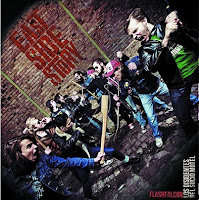 As I told you a while ago, French bands LOS DISDENTES DEL SUCIO MOTEL and FLASHFALCON have recently teamed up for a Limited LP split release (500 copies) entitled "East Side Story". This gathering of french stoner/rock n'roll brotherhood was mixed by Kris Arnaud  at Warmaudio Studio, mastered by Glen Robinson (AC/DC, Ramones) and will be out on March 9th via Deadlight Entertainment.
And thanx to Domino Media for sending me the whole stuff which contain eight songs., here's now the review of this split effort. Each band performing 3 brand new tracks (including one dealing with the other band) and a cover of the other !
I really enjoyed LDDSM debut album and was impatiently expecting some more cool stuff from them,... But no need to hide the facts : I feel sorry to conclude that there's a slight disappointment towards their 3 new songs here... They have lost a great part of their amazing taste for full of vibes, wild and authentic Stoner 'n roll , playing here something a lot more mellowed (mostly vocally wise) , not as raw and powerful . This is well executed, still pretty heavy and  straight but sounds like the chorus had been composed by request of a commercial radio, ! Whereas the general atmosphere of their debut was breathing the warmness of the desert with tight turns and omnipresent dust,  we're more here on a urban road, too straight and smooth... I doubt this is done on purpose and definitive, certainly just the truth of the moment and those songs may take another dimension LIVE... But I'm afraid those chorus and this approach are too different from their true origins to wholly satisfy the expectations of their early fans.
What about FLASHFALCON then ? I heard great comments about their debut album "voracious appetites, venomous bites" and must admit that the 3 songs here are a pretty good surprise... Just like their fellows, have been influenced by QOTSA, they have a great deal of FU MANCHU in their music but FLASHFALCON's style is equally rooted in PUNK'n ROLL and adds even a bit of Metallic power to the overall... This is straight, raw and authentic, nothing too generic or eyeing on more commercial perspectives, melodic but always thick.
At my greatest surprise the result is in my opinion largely in favour of FLASHFALCON, this said I just hope that this is a little accident for LDDSM which remains a great hope of our STONER scene...