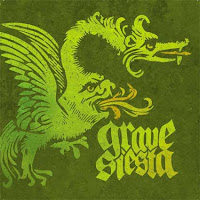 Here's the debut album from GRAVE SIESTA, a name that seems to have a bit of difficulty to make its place in the more and more overcrowded Worldwide DOOM scene, one must admit that just the local cometition in Finland is particularly ferocious !
But sometimes, things are hardly explainable, just work out this way for the moment but can quickly change... and I hope that's gonna be the case for this Finnish band who releases here this selftitled on INVERSE.
One first interesting thing (even if logical) is that the sound is much more rewarding compared to their demo, which was slightly amateurish on that point, it is MASSIVE and even if the band is not innovative in any particular point, this gives a special dimension to their identity.
GRAVE SIESTA is DOOM that's for sure, TRAD or not : that's another question ! but with REVEREND BIZARRE and CATHEDRAL as main influences, I would say YES of course... the Finnish masters for the  crushing heaviness ("barbaric", "meles infernus") and  the grooviness for the soon to be retired; but where Cathedral often eyed on 70's psychedelic stuff, G.S. doesn't, this is more on the catchiness and Iommi type of riffing ("cancer appreciation song")...
Where the question of "Trad or not" is asked, is at the point of the most powerful parts, when the tempo is faster and more agressive; this is not systematic at all in the structure of each song but is something to be noticed, and I hear there some more (modern) Stoner Metal à la HIGH ON FIRE (final part of "hanging expectations", "work enslaves"), not at all incompatible and even pretty welcome when it's used here and there like this.
So, why this relative lack of interest ? from what I know, this could come from some critics or reservations towards the voice of Taito Halonen... Without being at all the kind of "love it or hate it" type of singer, I can admit that it's maybe a difficult at the first listenings to get into his vocals, could sound a bit monotonous and lacking of deepness at times; it could be more melodic too but is always trying to be harmonious, I think his voice needs just maybe more time than others to be fully enjoyed at its true value, that's the effect it did on me and I really like the whole stuff now!
Ok, it's not the flashiest release of the last months, not on one of the most popular labels of the moment but it's again a Finnish band that respect the true values of DOOM and I don't ask more than that...